I called 818-PUMPKIN yesterday and ordered EIHN. I asked the girl about other things and she mentioned the long awaited Roxy video was to be released this spring and probably on DVD. Yeah, I know, but at least its a hope.

It's sitting in the vault. Waiting for a budget to do it properly. Basically the film footage, the negatives were transferred by Frank in the '80s using '80s technology. What we want to do is go back to the original negatives and do it in High Definition and then create a 5.1 mix from the original masters so that we have surround sound as well as Frank's 2 channel stereo mix. Once we get all that together, then we need to cut the program. Edit the program together, camera angles, what shows, what we are going to include from what shows or include all the shows. I have no idea what Dweezil and Gail want to do. It's great stuff, but the process of just getting to that point is going to cost a lot of money and take a lot of time.

The FZ ROXY audio is being assembled—tapes are being baked—so that the process of synchronization can occur. The film negative was transferred to Hi Def and the audio is captured at the highest resolution from the original analog tapes. YES this is getting underway...

It's all been transferred to high definition but the problem is it all has to be put in synch, and there's more than 30 hours of footage. That's hundreds of hours of time spent to get it all together. At the time it was filmed they really didn't have a great crew, they just didn't have it together. There are a lot of annoying hours ahead getting that stuff organized before you can properly edit it.

Andrew Greenaway, "Zappa At The Roundhouse," The Idiot Bastard, November, 2010

The final question (from Martin Ahrens via Amaretto Mick): when will we see The Roxy Performances DVD? "Not never," said Gail.

Re Roxy— Here is what we know so far: First of all there is no synch and there are 3 fairly consistent camera angles and on that is pretty random. Everything visual that we have found so far has been transferred into HD. All audio elements (stereo mixes and multi-track masters) now live in the digital world. What we need now is a director/editor (and/or both) and a budget to produce the whole of it. There is an astronomical amount of work to be done—conforming, synching, surround mix, general clean up and organizational stuff. All we have here is FZ's stereo mix, but that's it. Now we just need time and money. That and a few other value judgments based on what FZ actually saw are the reasons why he never made it a priority. The good news is we have a slightly different system of values and see it as a worthy artifact to keep pushing up the hill of possibility.

About 10 Years Ago, [we] decided to announce plans for the Roxy Performances to be unleashed at last on a wholly suspecting public and others besides. [...]

Because of the condition the condition was in—no synch, no idea what was what, no idea of the actual coverage, no idea of the quality; all the et ceterae that caused FZ to abandon the project completely—it took all this time (if you include all the other priorities and distractions) to get to this point, so near and yet so far: All of the footage has now been transferred on a best light basis into HD and all camera angles have been "synched" by eye and heart and hand and edit to the original Nagra tapes. We now need to identify all usable camera angles and begin the actual edit. [...]

Now that we have thoroughly identified all [its] parts and participles, we will deliver The Movie without further incident and maybe only a little ado. In theatres, DVD and Blue-ray, sometime before December, 2013.

We are also pleased to inform you that the MOVIE will be ready in time for the ZPZ Show at the Roxy on the 40tieth anniversary of FZ's Performances there.

The original Frank Zappa "Roxy" movie has finally been completed and the release date will be announced soon.

"Frank Zappa & The Mothers Roxy The Movie," British Board Of Film Classification, August 19, 2015

Are these the original covers & tracks for the Blu-ray & DVD-Cd of the Roxy movie? 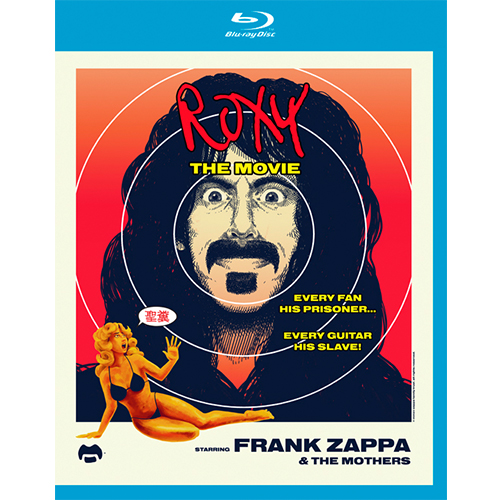 A Zappa movie experience unlike any other. Prepare to have your minds and ears blown!

Discussion following the film with guests to be announced.

Alex Winter, who is working on an authorized Zappa documentary, moderated the post-screening Q&A. Ralph Humphrey and Bruce Fowler came down from their seats to join the panel. Editor John Albarian, archivist (or "Vaultmeister") Joe Travers and producer Jeff Stein explained that the over 40-year delay in the movie's release was due to technical problems. A malfunction that took place four minutes into the first of the filmed concerts meant that the footage and sound could not be synced until the advent of digital technology; another glitch took out the crew's intercom, with the result that much of what they shot bore no relationship to what was happening onstage (e.g., the camera is on Zappa's foot while George Duke takes a solo). Albarian consequently had to do a lot of "cheating" in the editing room, which he said was made easier by the band's wardrobe (black T-shirts and blue jeans every night).